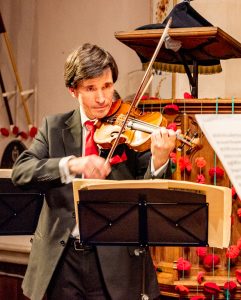 Simon graduated from both the Royal College and Royal Academy of Music, where he was awarded the Rowsby Woof Scholarship.  He was appointed Artistic Director of the Bristol Ensemble in 2021 and has directed a number of projects with them since joining the ensemble in 2011.

In addition to this he also records and performs with a number of groups including La Serenissima, The Avison Ensemble, The New London Consort, The Academy of Ancient Music, The OAE, The Sixteen, The Kings Consort, Concerto Köln, the Scottish Ensemble, The London Mozart Players, Orchestra of St. Johns, Britten Sinfonia, The Royal Philharmonic Orchestra and The English Chamber Orchestra.

As a soloist and chamber musician Simon made his concerto debut at the age of 16, his London debut at the Purcell Room in 2004, has numerous solo and recital performances on the baroque violin, and has recently recorded concerti by Vivaldi and Valentini with the period instrument group La Serenissima. Simon has also performed live radio/television broadcasts for the BBC and HTV, as well as on American, Mexican and Spanish radio.

Simon has given workshops at Goldsmith’s University, London, has given violin masterclasses at Bristol University, and coaches at the Royal Academy of Music Junior Department.  Simon also teaches violin at Wellington School, Taunton School and Kings Hall School. He holds a recent and full DBS certificate.